Costumed characters in Times Square are giving the finger to attempts to rein them in, refusing to stay in designated areas and continuing to curse in front of kiddies and threaten passers-by for dough. 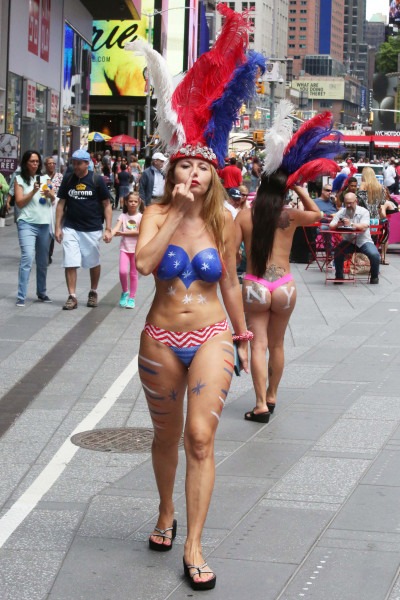 Foul-mouthed desnudas, grabby Hulks and tourist-terrorizing gangs of Minnie Mice are still brazenly holding the Crossroads of the World hostage even amid a heavy presence of NYPD cops, who act oblivious to their disturbing antics.

At any given moment on two recent afternoons, only half of the two-dozen tip-mooching characters stayed behind the blue lines of Times Square’s “Designated Activity Zones,” or DAZs, the city-mandated areas created last year as their boundary for posing for photos and asking for tips.

Yet none of those who illegally strayed outside the zones were issued summonses by the half-dozen police patrolling the pedestrian plaza.

A law-enforcement source shrugged that the officers’ hands were tied since most of the costumed panhandlers are illegal — and under the de Blasio administration, it’s a no-no to go after them.

Mayor de Blasio signed the bill that created the DAZs.

The most shameless of the costumed pack repeatedly left the DAZs to grab, mob and berate tourists — “Take a photo lady! Mami!” shouted a trio of overly-aggressive Minnie Mice — in their frantic pursuit of cash.

“I told you, if you don’t have a tip, then f— off!” one star-spangled desnuda, a painted nude hustler, snarled to a Post reporter, displaying just the sort of greed that detractors say is ruining Times Square’s happy, family vibe.

The superhero was well outside the DAZ at 47th Street and Broadway, getting tourists’ attention by running up to them and putting his bulky green arm around their shoulders.

At 46th Street and Seventh Avenue, a trio of polka-dotted Minnie Mice were working in tandem.

“Suddenly, there’s three Minnies in your picture,” Tomkins said. “And a Batman, and a Spider-Man. And they all want cash. And they’re all outside the zone.

“It’s a total f—ing scam, and it happens thousands of times a week,” he said, clearly frustrated.

Several weeks ago, Times Square Alliance staffers observed the DAZs between 45th and 47th streets from 4 to 9 p.m., the organization said.

Twenty costumed characters were at work. Of their 418 character-initiated encounters, 67 percent occurred outside a DAZ, the Alliance said.

The characters walked away with tips in fewer than half — 43 percent — of the interactions.

Nearly every interaction, 88 percent, involved the character touching the member of the public.

“They are very aggressive,” Tashay Carter, 30, from Birmingham, Ala., complained.

“I just encountered that with Cookie Monster. I didn’t want to get a photo, and he or she or whoever it was, they were very aggressive with me.”

A few of the creatures assiduously tow the line. A panhandler dressed as Donald Trump was one of the best behaved on recent visits by The Post, though it was odd to see him shunning publicity.

“I don’t wanna say anything,” he told a reporter.

Robert John Burck, a k a the Naked Cowboy, also was among the most law-abiding.

“You can make it work if ya try!” he said of the DAZs with a chirpy twang. 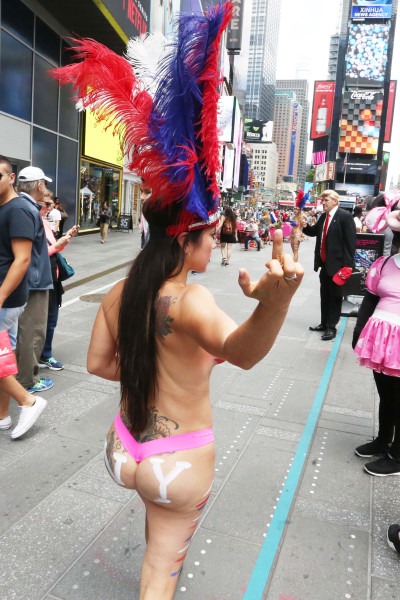 But in the worst cases, the characters can leave their victims terrified.

A woman who works in the plaza recalled an encounter from last week. The petite Asian woman said she had been taking a cell-phone photo at 47th Street and Broadway when a Cookie Monster attacked her.

Assuming she was a tourist, the fuzzy blue character ran over and locked her into a tight one-arm embrace, all the while shouting “Arigato! Arigato!” — Japanese for thank you.

“It took multiple times saying, ‘No. Don’t touch me!’ ” before Cookie let go, said the woman, who asked her name not be used.

“Within a minute, a Minnie Mouse, before I even saw her, had her hand on the back of my neck, saying, “Picture! Picture!”

The woman said she again had to shout repeatedly, “Don’t touch me!” before the panhandler let go.

Eight DAZs were established a year ago to keep the costumed creatures literally in line after a series of ugly incidents, including a Spider-Man who wouldn’t let go of a 13-year-old kid until the father paid $10 and a Batman who snatched a $50 bill from an Irish tourist’s wallet.

But in the first 12 months since the zones were established, cops issued 220 summonses — or an average of well below even one a day, despite the flagrant flouting of the rules

Part of the problem is the panhandlers can be elusive.

When they see cops coming, “they dart back into their DAZs,” Tompkins said.

The law-enforcement source added that past proposals to license the creatures went nowhere because most of the panhandlers are illegal immigrants and they wouldn’t register anyway. Besides, the administration at City Hall isn’t interested in going after illegals in this capacity, the source said.

And given that Times Square is a prime terror target, herding Elmos and Minnies isn’t exactly the highest priority, the source noted.

Asked about the issue, City Hall referred The Post to the NYPD. Police spokesman Peter Donald responded in an e-mail that “the enforcement data tells a different story. There have been a number of arrests and hundreds of summons issued to costume characters over the past year in Times Square.”