Betty and Victor are a pair of scam artists. One day Betty brings in Maurice, a treasurer of a multinational company. Maurice is due to transfer 5 millions francs out of Switzerland, and Betty is convinced he plans to steal that money. On whose side is Betty – Victor’s, Maurice’s or only her own? 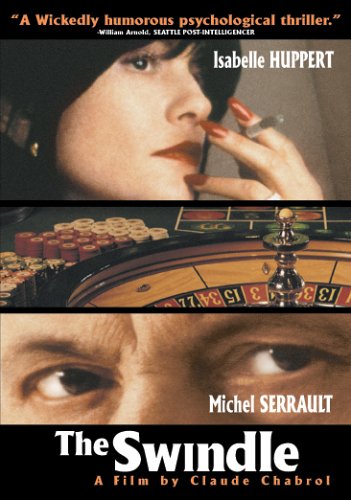 In Claude Chabrol’s fiftieth film, two lifelong partners in crime, Betty (Isabelle Hupert) and Victor (Michel Serrault), operating out of a small RV, criss-cross the country, hopping from convention to convention and scamming bourgeois businessmen out of petty sums of money. They make enough, however, to maintain a comfortable if elusive lifestyle. When Victor discovers that Betty has been carrying on her own scam for over a year, the blurry lines between secrets and lies break down. As the scheming duo go ahead with Betty’s complicated scheme to steal a breifcase from a man (Francois Cluzet) who holds the treasure of a multinational corporation, the film kicks in to high gear. Filled with switched identities, changing allegiances, suppressed romances, and switcheroos, the elaborate story, which takes viewers from the Swiss Alps to the tropics, leads to an operatic and surprising climax. True to Chabrol’s style, the ambiguous and compelling psychology, always in flux, propels the drama of the film forward even more than the actual danger of the plot.

“…Mr. Chabrol keeps curiosity piqued, the actors delightful and the outcome in sufficient question. The performances are so winkingly adroit that THE SWINDLE becomes as much a character study as a caper story…It glides gracefully as both…”
New York Times – Janet Maslin (12/23/1998)

“…A work of superb yet unpretentious film craftsmanship by a past master and an impeccable cast and crew, THE SWINDLE itself is no cheat — an unalloyed pleasure, adult and sophisticated…”
Los Angeles Times – Kevin Thomas

“An adroit and enjoyable caper movie, Hitchcockian in its elegant playfulness, and darkly comic in tone.”
Sight and Sound – Kate Stables (05/01/2006)