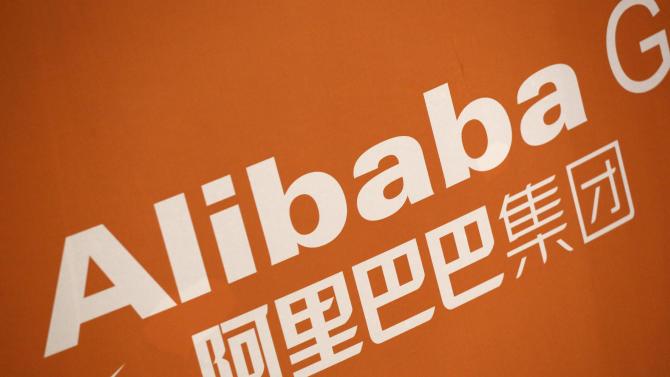 FILE – In this Sept. 19, 2014 file photo, the Alibaba logo is displayed during the company’s IPO at the New York Stock Exchange in New York. Chinese regulators accused e-commerce giant Alibaba on Wednesday, Jan. 28, 2015 of permitting sales of fake goods and hurting consumers in a report that was withheld until now to avoid disrupting the company’s U.S. stock market debut. (AP Photo/Mark Lennihan, File)

Alibaba, one of China’s biggest private companies, responded Wednesday with a statement accusing the regulator of bias and misconduct in a rare break with the obedient public tone of Chinese businesses in dealings with authorities.

The sternly worded report by the State Administration of Industry and Commerce said Alibaba allowed unlicensed merchants to use its Taobao and Tmall platforms and failed to protect consumers’ rights.

The report was the result of a meeting in July between regulators and Alibaba Group Ltd. management but the regulator said its release was postponed to avoid affecting progress toward the company’s New York stock market listing. Alibaba went public in September after raising a record $25 billion in an initial public offering.

Alibaba accused the SAIC official in charge of Internet monitoring, Liu Hongliang, of unspecified “procedural misconduct.” It said the company will file a formal complaint with the agency.

Such public defiance is almost unheard of in a Chinese system in which companies nearly always respond to official criticism by promising to reform.

“We welcome fair and just supervision, and oppose selective omissions and malicious actions,” said the statement. “Obtaining a biased conclusion using the wrong methodology has inflicted irreparable and serious damage to Taobao and Chinese online businesses.”

Alibaba did not immediately respond to a request for details of what it believed to be misconduct.

The U.S. government and others have accused Alibaba of allowing sales of counterfeit goods but Wednesday’s report was the first time the Chinese government has criticized a company that is a leading star in an Internet industry communist leaders are eager to develop.

“Illegal business exists on Alibaba Group’s trading platforms, and for a long time the company has failed to pay adequate attention and failed to take measures to stop it,” the government report said. “This not only is the biggest crisis of integrity faced by the company since its founding, but also has hurt other Internet companies that try to operate legally.”

It said Alibaba allowed “illegal advertising” that misled consumers with false claims about low prices and other details. It said some Alibaba employees took bribes and the company failed to deal effectively with fraud.

The report said regulators and Alibaba would work together to improve management but gave no details of planned changes.

Alibaba, founded in 1999 by Jack Ma, a former English teacher, was one of China’s earliest Internet companies. Its IPO made Ma China’s richest entrepreneur with a net worth of $25 billion.

Alibaba earned $485 million in the three months ended in September, which was its first quarter as a publicly traded company, and generated revenue of $2.7 billion. It said the total amount of goods sold rose 49 percent and the number of active buyers rose 52 percent to 307 million.

The U.S. Commerce Department added Taobao in 2011 to a blacklist of “notorious markets” linked to sales of pirated and fake goods. The company was removed the following year.

In December, the company said it had removed 90 million listings for goods that might have violated intellectual property rights. The company said it spent $161 million from the start of 2013 through late 2014 on blocking counterfeit goods and improving consumer protection.

In January, Alibaba and the U.S. Consumer Product Safety Commission announced an initiative under which the Chinese company will prevent vendors from exporting to the United States goods that are the target of recall orders.