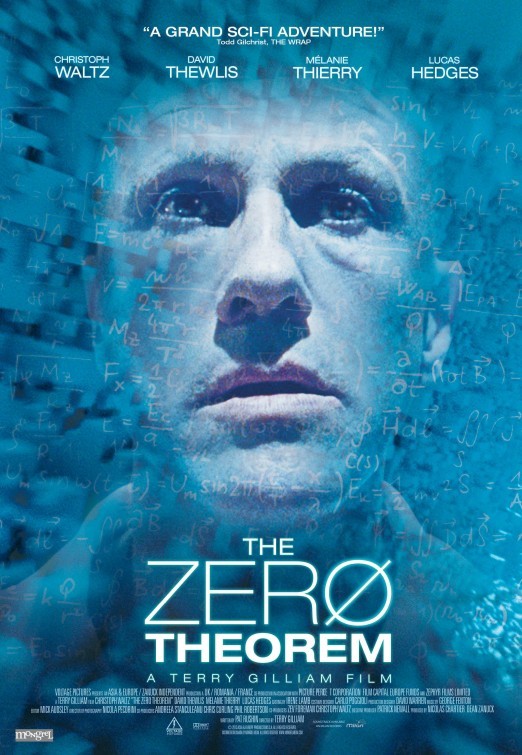 The last two decades have been a career roller coaster ride for director Terry Gilliam. Acquiring studio faith with 1995’s “12 Monkeys,” the helmer subsequently lost his Hollywood itch with 1998’s “Fear and Loathing in Las Vegas” and 2005’s “The Brothers Grimm.” The rest of this time was devoted to screaming indies, chaotic efforts such as “Tideland” and “The Imaginarium of Doctor Parnassus,” which did more to reinforce Gilliam’s frustration with filmmaking, intentionally submitting off-putting pictures as an act of defiance. His latest, “The Zero Theorem,” is reminiscent of Gilliam’s earlier triumphs, acting as almost a sequel to 1985’s “Brazil” with its vision of authoritarian hell and psychological flights of fancy. This isn’t Gilliam reclaiming what’s been lost throughout the years, but it’s refreshing to encounter one of his features and not wish to be somewhere else enjoying the afternoon.

A tortured programmer with the all-powerful Mancam Corporation, Qohen (Christoph Waltz) is struggling to make sense of his existence, fretting over a missed phone call that promised to provide answers concerning the meaning of life. Finally receiving permission to work from home, Qohen is tasked by Management (Matt Damon) to discover The Zero Theorem, a mathematical formula that proves life is meaningless. Frustrated with his inability to crack the code, Qohen’s nerves are soothed by Bainsley (Melanie Thierry), a comely young stranger who invites the fried man to join her in a virtual tropical paradise, while young Bob (Lucas Hedges) arrives to assist the programmer with technical woes, stoking his issues with paranoia. Uncertain and unhinged, Qohen teases madness, growing comfortable with the illusion of life as the real thing spins toward oblivion.

Gilliam doesn’t have access to big budgets anymore, leaving “The Zero Theorem” restrained when it comes to the vision of an enormous metropolis filled with zonked-out worker bees filing into Mancam’s offices, tasked with crunching numbers while tormented with quotas, riding stationary bikes to keep the blood pumping and productivity pure. Gilliam has the idea, but it’s reduced to a few choice shots, the best being Qohen’s trip into the streets, where video advertisements hound pedestrians, brazenly stalking them, while a preacher for the “Church of Batman the Redeemer” beckons from above. It’s dystopia on a dime, but the limitations work in the production’s favor, forcing Gilliam to pick and choose what’s important to show instead of indulging his customary interest in satiric mayhem. “The Zero Theorem” is a wild vision of a corrupted future, but it’s likely to be a depressingly prescient picture as well. The details of Qohen’s corporate tragedy are too familiar to dismiss as pure fantasy, with Gilliam playing up the agony of the programmer’s daily drudgery, unable to escape his work, his society, or even himself, showing signs of dissociative identity disorder after years melting for the man.

Of course, Gilliam is all about the details, and “The Zero Theorem” is happy to indulge outlandish set design and costuming, while Qohen is imagined as a bald, pasty feral creature, allowing Waltz to enjoy the psychosis with his own eccentricities. Artistic achievements, even with limited coin, are fascinating to study, with the futureworld’s tech and Bainsley’s gift of a virtual reality suit contributing to striking images Gilliam doesn’t spoil with extreme cinematography. Perhaps Gilliam’s natural spunk is cooling these days, with “The Zero Theorem” rather sedate when it comes to his barnstorming instincts, playing down manic energy to enjoy the oddness and encroaching instability of it all. It’s not a drastic change, but it’s enough to notice, signaling a return of the helmer’s patience.

Screenwriter Pat Rushin cooks up a grotty world that’s seemingly out to get Qohen, with workplace confidant Joby (David Thewlis) trying to keep the programmer on task, and there’s Dr. Shrink-Rom (Tilda Swinton), a virtual therapy system that offers little comfort to the unraveling man. Visions of a black hole tease Qohen’s curiosity, while visits to paradise with Bainsley provide him with a false sense of hope. Rushin’s imagination is vast and his creation of a pressurized work environment (one that demands hourly progression reports) that employs video game tech to solve dense mathematical puzzles is compelling, and “The Zero Theorem” holds it together for quite some time, building a compelling mystery of surveillance and self-doubt. Gilliam being Gilliam, the lure of anarchy proves too tempting, with the final act going overboard, trying to create a disorientating swirl when the feature was already comfortable with just a sampling of confusion. However, this was expected. What’s surprising is how much of “The Zero Theorem” clicks without fuss, watching Gilliam try out a little moderation for a change.