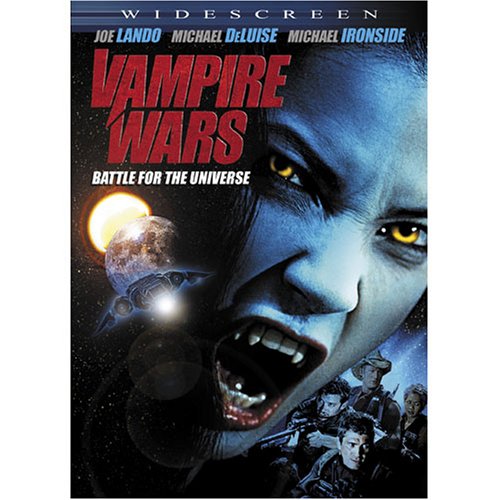 Amazon.com synapses — Natassia Malthe, Michael Ironside, Joe Lando, Peter DeLuise, Michael DeLuise. In 2210, a vampire sanitation crew is lured into a trap on an isolated planet where they discover that vampires are plotting to take over the universe and they’re getting help from a shocking source. 2005/color/99 min/R/widescreen.

Amazon.com review, by Fred – I’ll quote from the back of the DVD box: VAMPIRE WARS: BATTLE FOR THE UNIVERSE: “The Year is 2210. The universe is overrun with hundreds of vampire species that prey upon humans in brutal, surprise attacks. That’s when intergalactic Vampire Sanitation teams are called upon to lay waste to these vile predators. V-SAN crews, who’ve come to know their line of work as ‘the toughest job you’ll ever hate,’ are comprised of rough and rugged men, women–and in the case of the Heironymous crew–a half-human vampiress named Quintana (Natassia Malthe), who draws upon her psychic prowess to help the V-SANS track their quarry. Led by Captain Nicholas Churchill (Joe Lando) and second-in-command Damian Underwood (Dominic Zamprogna), the Heironymous team becomes the target of a deadly trap that has much deeper and darker purpose. Directed by their vile leader Muco (Michael Ironside), the vampires have no plans of living peacefully with humans…they want to rule the universe.” If you’re a fan of vampires and space adventure movies and TV shows, then VAMPIRE WARS definitely belongs in your DVD library. Echo Bridge Home Entertainment (formerly Platinum) has come a long way in improving the quality of their DVD’s. The picture and sound quality of VAMPIRE WARS is crystal clear with no pixelation whatsoever. The animated Menu that opens the movie is exciting and interesting as well. Don’t overlook the “scene select” option–each of the 3 scene select grids have different rock songs from the movie playing in the background. VAMPIRE WARS will be in my DVD collection forever! TRIVIA NOTE: on the DVD box of BLOOD SUCKERS, the Canadian release of the movie, the year is 2205–while on the box of the VAMPIRE WARS version, the year is 2210! Also, on the BLOOD SUCKERS DVD box, the team are referred to as “Nosferatus”, instead of V-SANS. Take your pick! For the sake of completeness, I’ll quote from the back of the BLOOD SUCKERS DVD box: BLOOD SUCKERS: “The year is 2205. After exhausting Earth, we now import vital natural resources from other planets. Suddenly Earth finds itself invaded by alien vampires in search of their own natural resource: human blood. Now it’s up to a team of combating specialists known as “Nosferatus” to save our planet and our species against these highly intelligent and savage bloodsuckers.”